Campaign against the transport of shark fin by airlines

"Fly Without Fins" is an international campaign by Shark Guardian and Sharkproject, together with many other marine conservation organizations, to convince airlines to stop the transport of fins.

Airlines transporting shark fins contribute to this terrible trade in shark fins, exploiting our oceans and biodiversity, with no end in sight despite all the appeals. Without the logistics of air freight, it would often be much more cumbersome and lengthy to transport the fins from the ports in South America to their destination in Southeast Asia. Recently, the transport of fins by air, on board both cargo and passenger aircraft, has increased immensely and gained importance for the industry.

To date, many airlines have not been able to demonstrate that they do not transport shark fins on board their aircraft. We estimate that 85% of all airlines are profiting from this horrendous business.

Only 15% of the airlines could guarantee not to transport fins when asked. It would be so important for international airlines to send a clear signal against the trade in shark fins and the exploitation of our oceans.

To give you an overview of which airlines should be denounced for their irresponsible and greedy behaviour, the "Fly Without Fins" campaign was created. All major and well-known airlines of the world, in the association of IATA, are listed here and shown whether the respective company is involved in the shark fin trade or not.

Furthermore, there is also the possibility to send a standardized direct tweet via the social media service Twitter, in which you ask the airline to stop the transport of shark fins. Here you can easily support us from home and show the airlines how important the protection of sharks is to you.

Goals of the campaign

Information and further updates on the campaign will be posted on social media or shared at www.flywithoutfins.org.

Join us and be part of the movement for a fin-free airspace.

How you can join in

You don't have Twitter? Then make appropriate entries in your social media account, refer to the Fly Without Fins website, set hashtags for the airline as well as Fly Without Fins and Sharkproject. Thank you for your support!

Current Focus of the Campaign 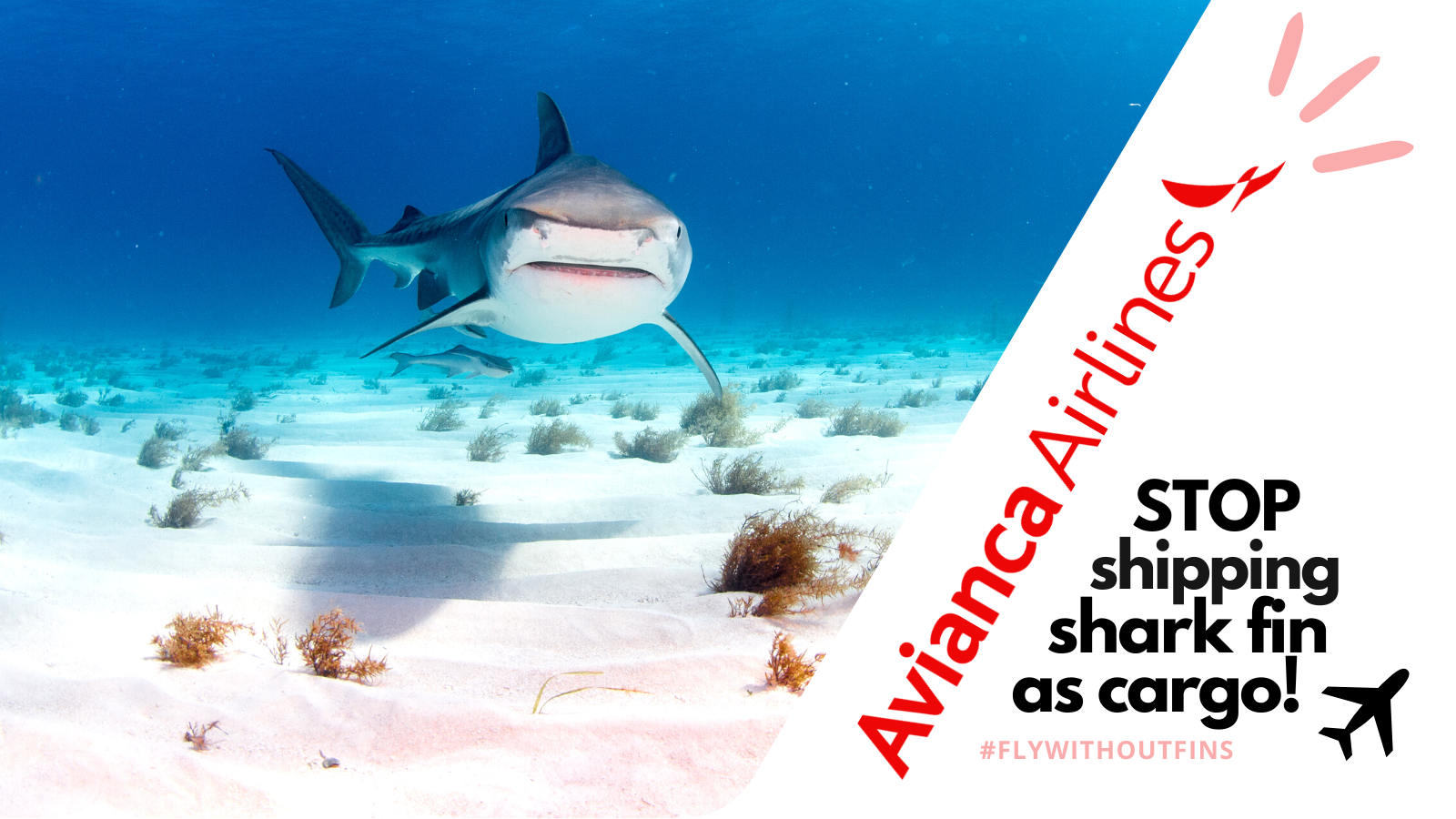 Avianca is the largest airline in Colombia and the second largest in Latin America, after Chile's LATAM.
LATAM does not transport shark fins and has a blanket ban, and we expect Avianca to do the same since Latin America exports massive volumes of shark fins via air cargo.

In September 2021, Colombian officials captured 3,493 shark fins at Bogota's airport before they could be illegally sent to Hong Kong.

"The shark fin trade is brutal, fins are sliced off live sharks and millions perish each year. Many airlines perpetuate this barbaric trade by facilitating transportation. @Avianca Be part of the solution and commit to a shark fin ban today? #FlyWithoutFins" 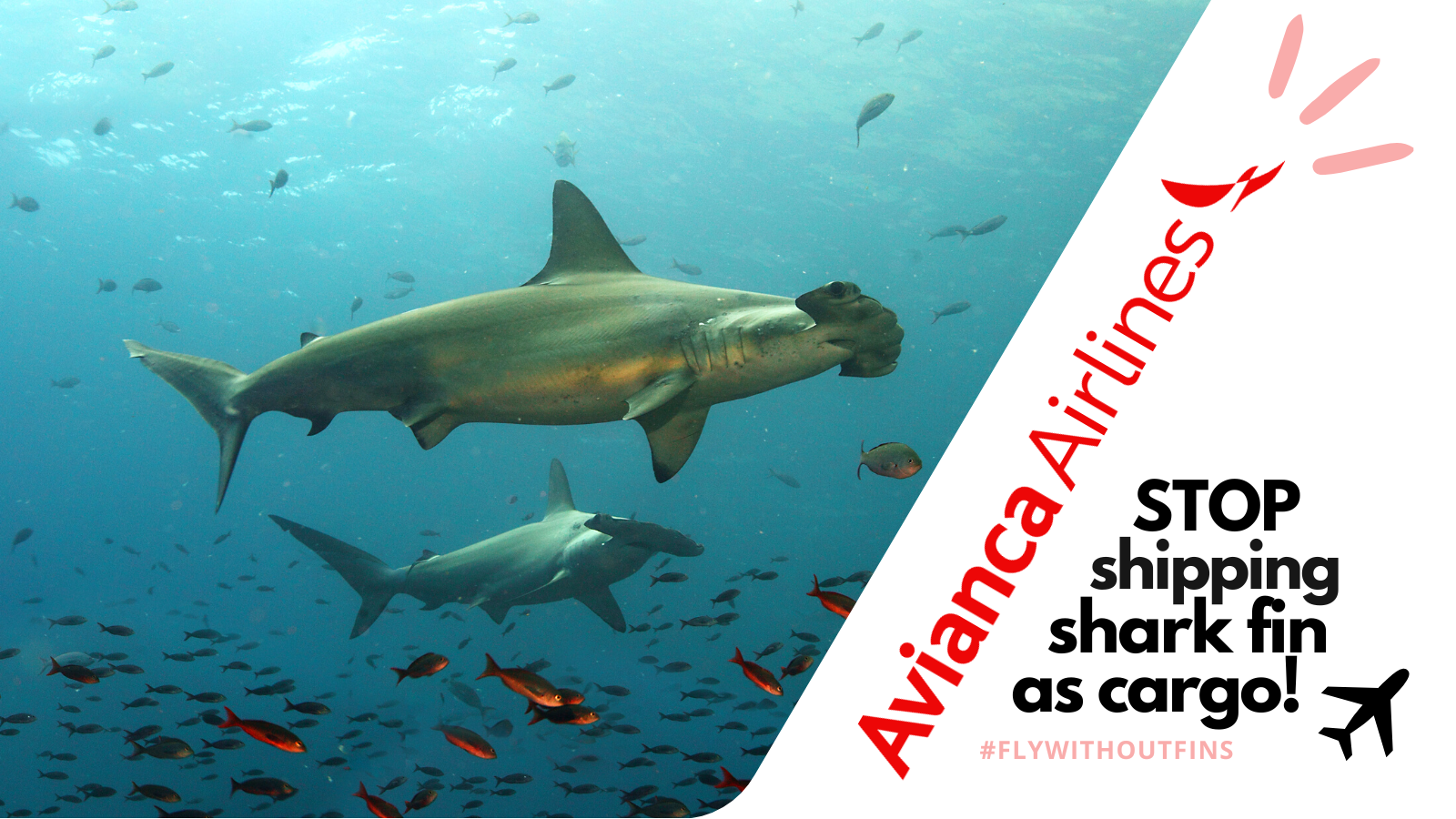 Previous Focus of the Campaign 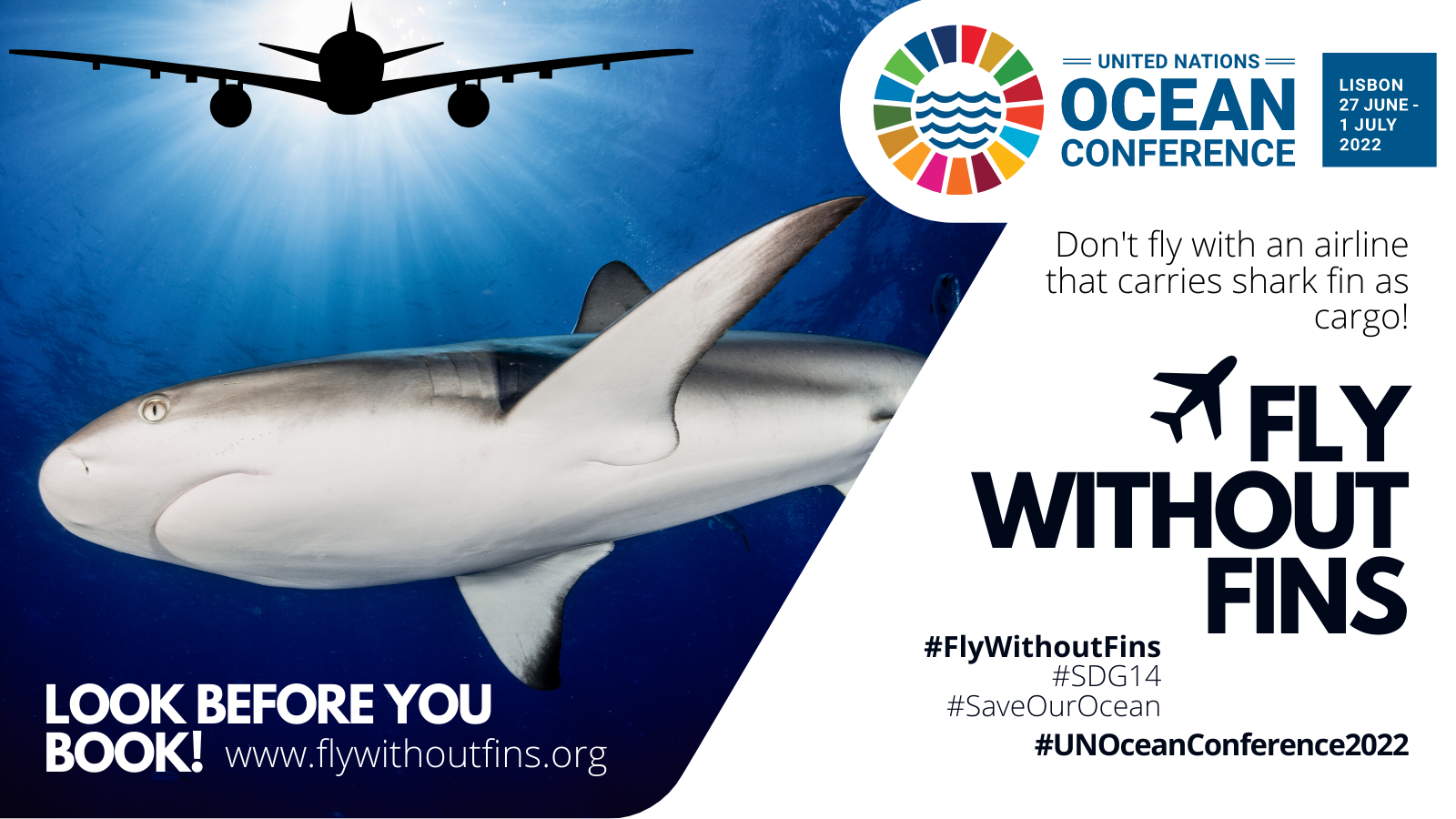 Fly Without Fins to the #UNOceanConference2022: 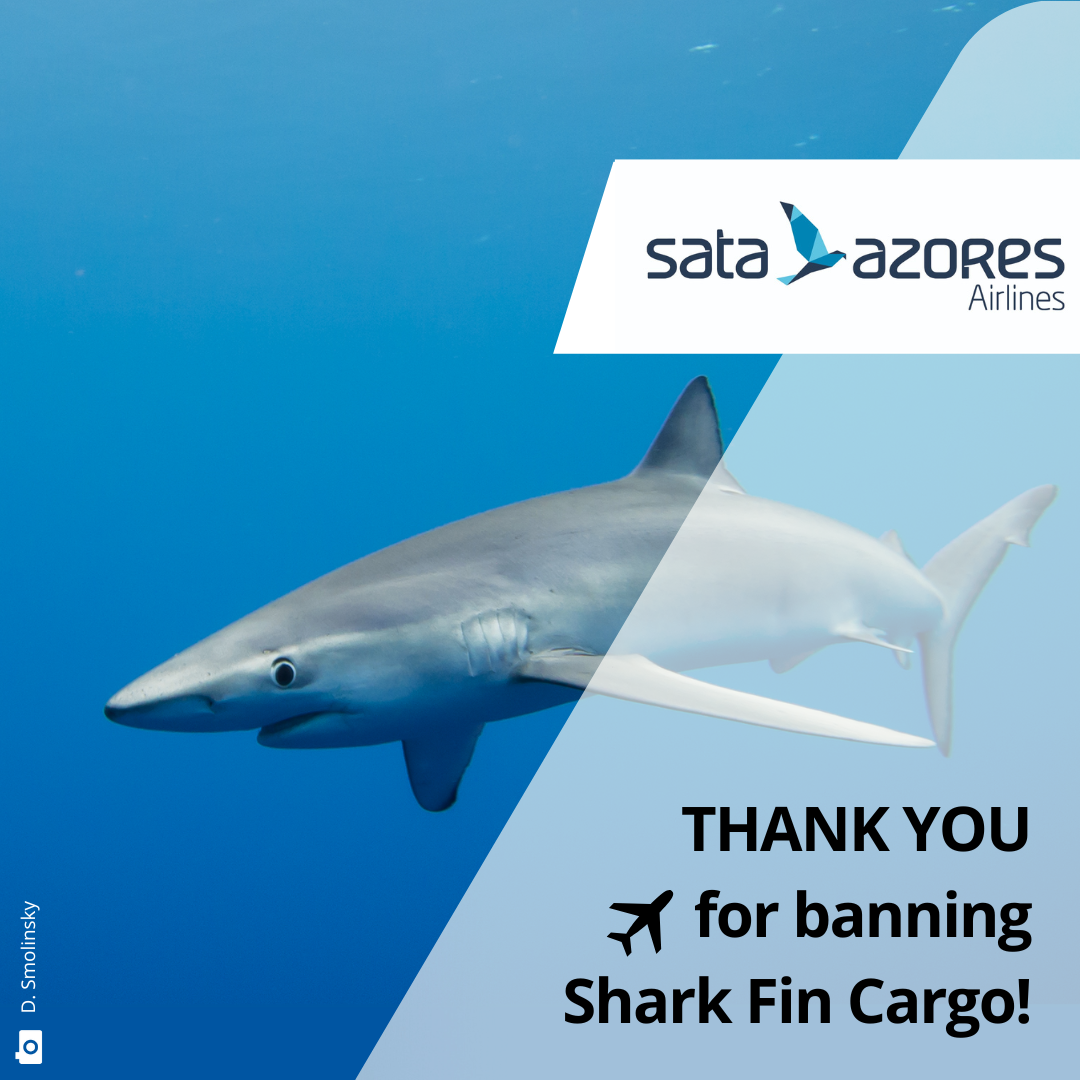 SATA Azores Airlines has publically declared that it will not transport shark fins as a supporter of Fly Without Fins.
The SATA Group's airlines (SATA Air Açores and Azores Airlines) have taken voluntary, proactive steps to prevent animal cruelty by endorsing the Fly Without Fins campaign.
This entails a ban on the shipment of any shark fins or other cartilaginous fish components.
Here you can find the link to the full news release:
https://www.azoresairlines.pt/en/SATA-Azores-Airlines-%20joins-Fly-without-fins-initiative 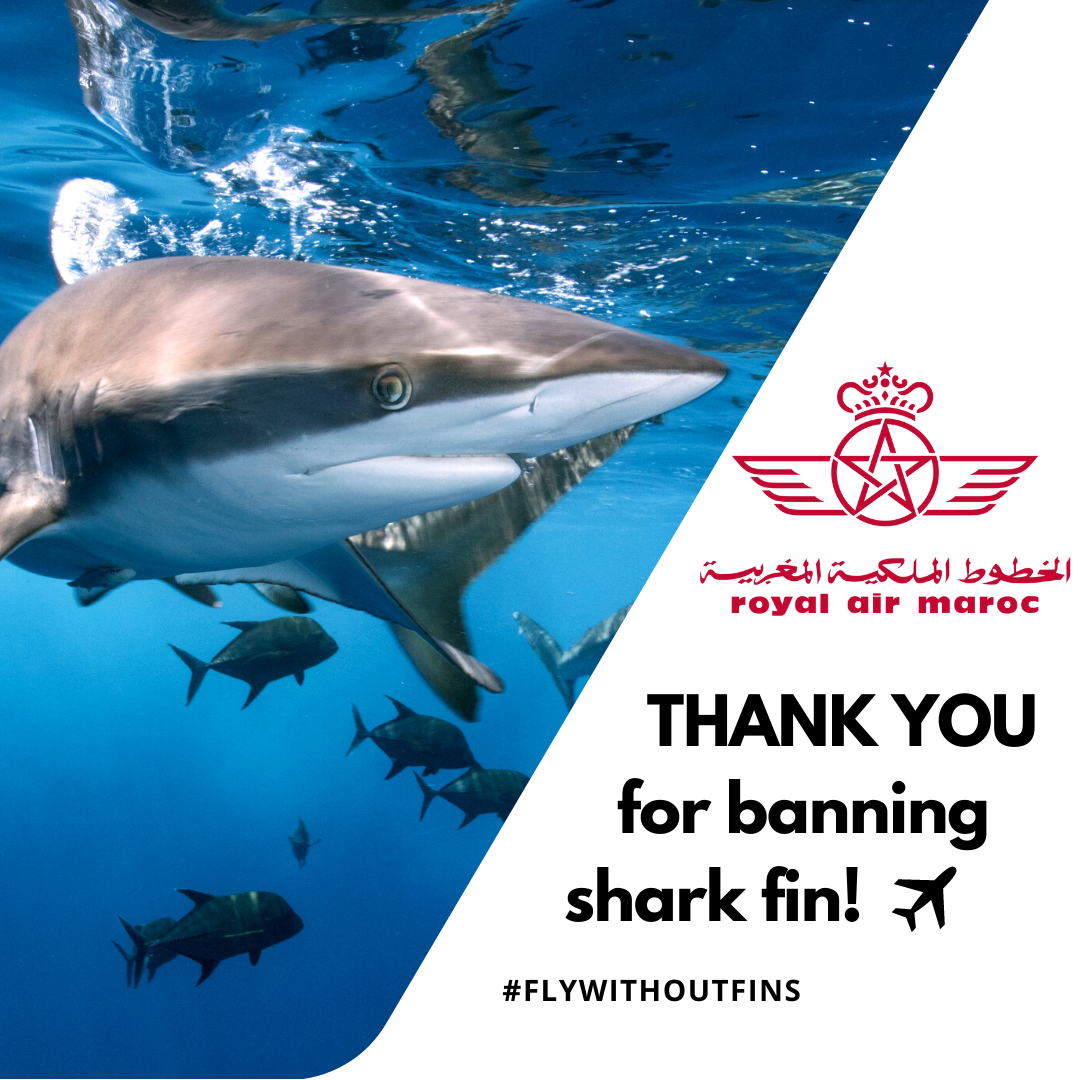 We are delighted to report that Royal Air Maroc has joined the ranks of airlines that do not transport fins! We commend their efforts to safeguard sharks and the oceans, especially since shark finning is still legal in Morocco!

Amina Tagemouati (Head of CSR and Sustainable Development at Royal Air Maroc) responded to the email and verified that they do not carry shark fins as cargo and will not do so in the future.
Royal Air Maroc also issued a statement on Twitter, saying, "We are all accountable for making environmentally good decisions.

We have chosen to make sustainable growth and environmental conservation our primary priority."
Thank you to Royal Air Maroc and to everyone who signed the petition and actively pushed awareness on social media.

The petition has now been finished successfully:
https://www.change.org/p/king-mohammed-vi-of-morocco-royal-air-maroc-stop-shipping-shark-fin-cargo/u/30631187

Only with your help, we will get more airlines to stop transporting shark fins! Post today: www.flywithoutfins.org 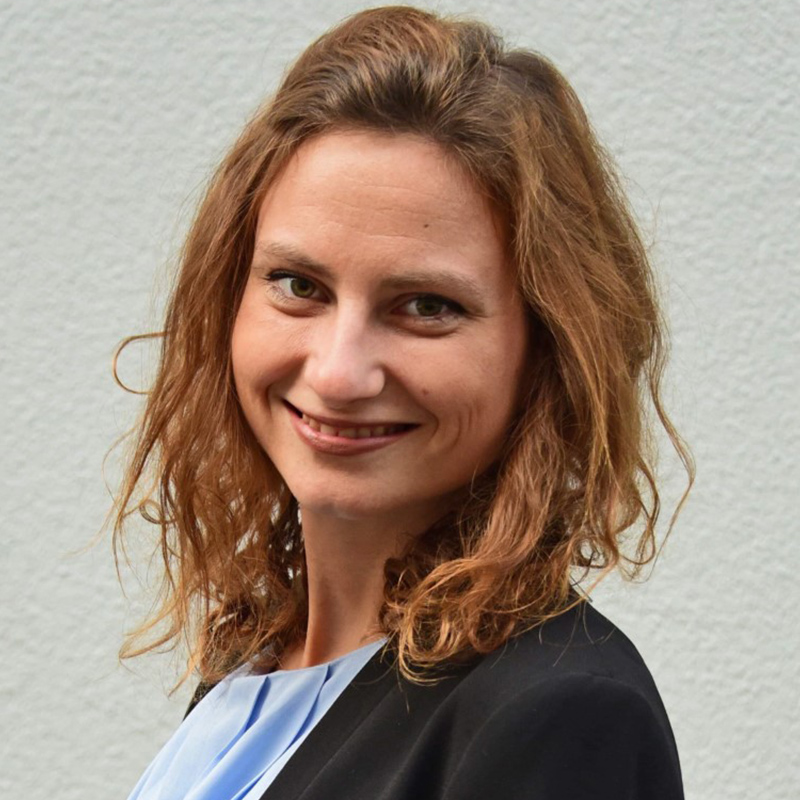