OneOcean is an alliance of different ocean organizations that influence the protection of the oceans through coordinated and effective communication. So for us as Sharkproject, being part of the flotilla is a must.

Based on the work of scientists and other experts, OneOcean provides a platform to participate in marine conservation activities in a unified way. OneOcean's main goals include:

What is the goal of OneOcean?

The overall goal is better protection of the world's oceans. OneOcean raises the voice of the community with the right message and at the right time.

How does OneOcean do it?

They inform, guide and equip the OneOcean Flottilla groups with everything necessary to achieve effective communication. They provide the necessary space to share issues, information, approaches, and thoughts. Through regular analysis and strategic recommendations, they ensure that members raise their hands, their collective flags, at just the right moment.

To achieve the desired change for the oceans, effective communication — especially among the various conservation organizations — is imperative. This communication can be improved through technically correct research.

This information is summarized in the so-called OneOcean briefing, in a report that is made available to members on the OneOcean website. The main focus here is on the international English-speaking world. Depending on the news situation, the focus of the data collection is changed to cover interfaces. For example, outside of “direct” marine protection, topics such as climate change, environmental pollution, human rights or even Covid-19 also fall into this category, as they all in turn have an influence on marine protection. From time to time, there are also ad hoc reports of specific issues that arrive unpredictably and cannot be delayed (including the Mauritius oil spill in July 2020).

Through regular meetings, OneOcean identifies the current issues and designs a suitable support package that enables members to respond to them in a coordinated manner. These include, for example: 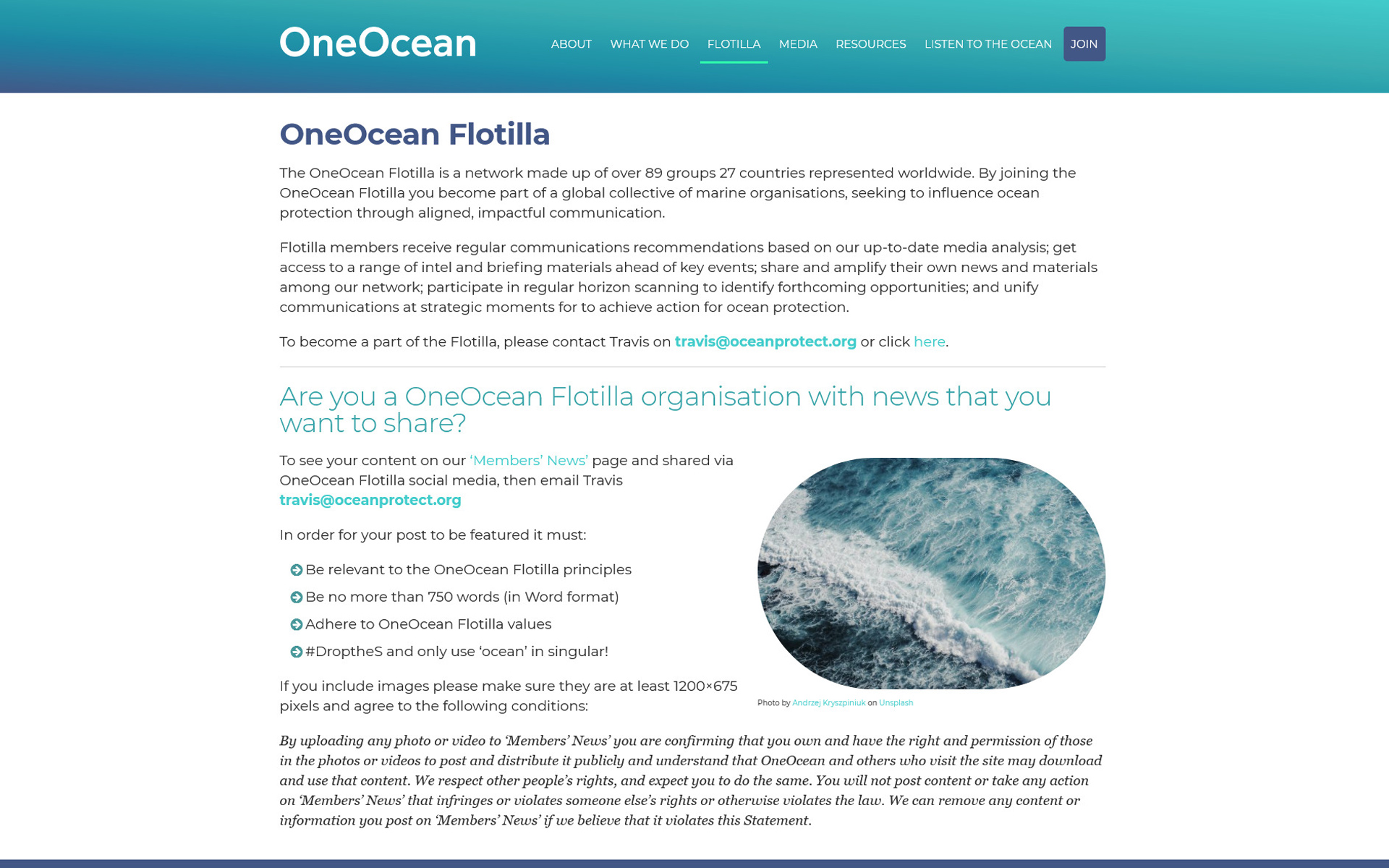 Blue Nature
The welfare of the oceans should be brought closer to the people. Because if the population is informed and educated, they will recognize the ocean as the most important climate asset.

30 by 30
At least 30% of the world's oceans are to be placed under nature protection by 2030. You can find a separate report on this under “30 by 30” from International Cooperation.

Resilience of the ocean
Our oceans absorb 90% of the excess heat in the atmosphere and over 30% of all carbon dioxide. So it makes a decided contribution to mitigating climate change. But the ocean is being damaged so badly that climate collapse will be the result if nothing is done about it. We can hardly prevent the warming, the acidification, the rise in ocean levels, and the deoxygenation at this time. But we can eliminate other stressors that are making it difficult for the ocean. These include illegal, destructive and excessive fishing, extraction and marine mining to chemical, noise and plastic pollution. The effects are felt particularly hard by coastal areas. Countermeasures to these would promote the health of the world's oceans, as well as help prevent further loss of species and habitats.

Climate and ocean collapse
If the ocean ecosystem is to survive — and with it humans themselves — the causes of climate collapse must be addressed and warming limited to 1.5 °C. All nations must commit to new, fairer, and more ambitious Nationally Determined Contributions (NDCs) to sustainably reduce emissions.