"You should deliberatly avoid these fish specialities!"

"Schillerlocke" (literally translated "Schiller-curl", because it looks like the haircut of Friedrich Schiller) is the smoked belly flap of the spiny dogfish. Especially in Germany "Schillerlocken" are considered gourmet food, while the pollution of fish like the spiny dogfish is hardly known. However, recent results from a state-approved laboratory have made it clear that the guide values of the quality limits are exceeded more than 200 times on average.

Even the legal maximum values are not adhered in individual cases. There may be big differences in the contamination of individual animals: at the same trader, a relatively low-contaminated "schiller curl" can be right next to an extremely high-contaminated one. The consumer is exposed to an incalculable health risk. The consequences can range from brain damage to death.

But how can this be?

The legislation in Germany has glaring gaps when it comes to protecting consumers from methylmercury and other highly toxic heavy metals. Wild catches from the sea are only tested on a random basis and not comprehensivly. While conspicuous batches are discarded and do not enter the market, the accuracy of testing is too coarse without comprehensive testing. Random testing may be sufficient for farms with uniform and consistent conditions (livestock husbandry, feed, origin), but not for wild fish from the sea. Therefore, it may happen that a
highly toxic shark may be found in the market right next to one with a low value. This cannot be helped; the top predators of the seas are cosmopolitans and migrate long distances in the oceans. No one can comprehend where sharks and other large predators have spent most of their lives until they are caught.

Anyone who now thinks that the quality seals found on the market so far offer a guarantee of good and healthy fish quality is mistaken.

The MSC (Marine Stewardship Council), probably the best-known seal of approval for fishery, confirms this itself on its German-language website https://www.msc.org/de/presse/stellungnahmen/hintergrundinformationen-zu-msc-zertifiziertem-dornhai

It says: "The assessment according to the MSC standard refers to the stock situation, the impact of the fishery on the marine ecosystem and the management of the fishery. It does not include criteria on the quality of the fish or on health compatibility, such as the content of environmental contaminants."

The advantage for your health? No toxin contamination!

The meat of large predatory fish (e.g. sharks) is highly contaminated with toxins. This dramatic-sounding sentence is unfortunately as true as it is concise: Methylmercury accumulates in the flesh of top predators, which humans ingest when consuming this meat.

Sharks are very high up in the food web of the oceans. Pollutants are already absorbed by microscopic animals and then accumulate in the animals that feed on them. So the higher an animal is in the food chain and the older it gets, the more environmental toxins it has accumulated in its meat. Sharks, which can live from 20 to over 400 years depending on the species, are therefore particularly affected. That is why their livers make up about a third of the animals' internal bodies, so that they can better cope with the toxins. For humans, on the other hand, methylmercury is highly toxic, according to the WHO and the Federal Ministry for the Environment, Nature Conservation, Building and Nuclear Safety. It can cause irreparable brain and nerve damages, severe kidney damages, deformities of unborn children, infertility and possibly cancer. There are even studies that suggest that methylmercury may be a major cause of neurodegenerative diseases such as Alzheimer's, as it is able to switch from the bloodstream to the brain and nervous system damage them.

The Federal Environment Agency and other governmental and non-profit organizations explicitly advise pregnant women and nursing mothers to refrain from eating predatory fish such as tuna or shark in their own diet just as the diet of children and adolescents. This applies in particular to shark. Fetuses, children and adolescents are five to ten times more susceptible to permanent damage from methylmercury exposure before they reach adulthood.

Methylmercury is directly absorbed by humans through the consumption of fish meat and accumulates in the body. This cumulative effect means that the time needed for the body to break down the methylmercury is prolonged by each new intake. In case of even averagely frequent consumption, this often leads to the fact that no more degradation of the toxin takes place in humans - the toxin remains permanently in the body and takes effect there. Even the smallest amounts of consumption, such as a single portion of "Schillerlocken", can be sufficient to reach or exceed the legally permitted limits for daily intake.

A study by the Christian Albrechts University in Kiel showed that the maximum daily amount was exceeded by a factor ten.

Pollution by methylmercury is only tested on a random basis by the fishery industry - controls throughout Europe have shown that the legal limits have been exceeded in a disturbingly high number of samples.
Health experts agree, that the limits for the consumption of methylmercury are set too high by the legislator anyway. Methylmercury is heat-resistant - it does not change through cooking in such a way that the danger and toxicity would be relevantly reduced. Therefore, from a health perspective, there is no doubt that the consumption of shark products, especially "Schillerlocken", has serious health consequences.

The advantage for the ecosystem and humanity? Survival.

As large predatory fish, sharks play a key role in the marine ecosystem. Since sharks have been on earth for 400 million years, prey animals had to adapt to sharks in the course of evolution. Without sharks, this adaptation would lose its purpose. Dominant fish species would then deprive others of their livelihood. In addition, sharks eat mainly sick and weak animals and thus keep the oceans healthy. Sharks are also essential for species such as corals or mussels, which create a habitat for other organisms, as they keep their natural enemies in check. In the ocean, the extinction of sharks could ultimately have an impact even on the composition of phytoplankton. These largely microscopic algae produce more than half of the earth's oxygen, and remove CO₂ from the atmosphere through conversion.

Every year, over 73 million sharks are killed, mainly through so-called "shark finning". This cruel practice involves cutting off the fins of still-living animals. Shark fins are mainly exported to Asia; the shark meat, on the other hand, is also consumed here in Europe. Many shark species are acutely threatened with extinction! There are serious estimates that about 90% of the large predatory fish have been caught from the oceans in the last 40 years. In Germany, too, the spiny dogfish is threatened with extinction in the North Sea. In 2013, over 500 tonnes of spiny dogfish were imported into Germany. Most of the imports came frozen from the USA and New Zealand, otherwise fresh from Denmark and Norway. In 2014, by contrast, only 176.8 tonnes were imported from Denmark, the Netherlands, New Zealand, Belgium and the USA. The decline is not intented by the industry, but is sad evidence of the severely depleted stocks. Only three fishing areas are considered to have healthy stocks, two in the Pacific (FAO 67/81) and one in the Northwest Atlantic (FAO 21). A fishing ban has been in place for the Northeast Atlantic off Europe's doorstep since 2011, but bycatch by local fishermen is not helping stocks to recover. Reduced shark stocks do not recover in the short term either.

The spiny dogfish only reaches sexual maturity between 7 and 24 years of age. Then, the females only give birth to 2 to 11 pups after a gestation period of just under two years. Intensive fishing therefore drastically depletes the stocks, especially when catching juveniles before sexual maturity. It must also be taken into account that the animals group together in schools. These are usually separated by size and sex. If a fishing net catches such a school, all reproductive females of a stock may be removed from the ecosystem in one fell swoop. Commercial breeding of large predatory fish such as sharks is also not possible. It is therefore particularly important that the shark ecosystem is protected and that large-scale protected areas are established. In such protected areas, fish stocks can regenerate so that the shark population can also recover and re-establish itself in other areas. This also benefits local fisheries, which profit from recovering fish stocks.

What can I do? 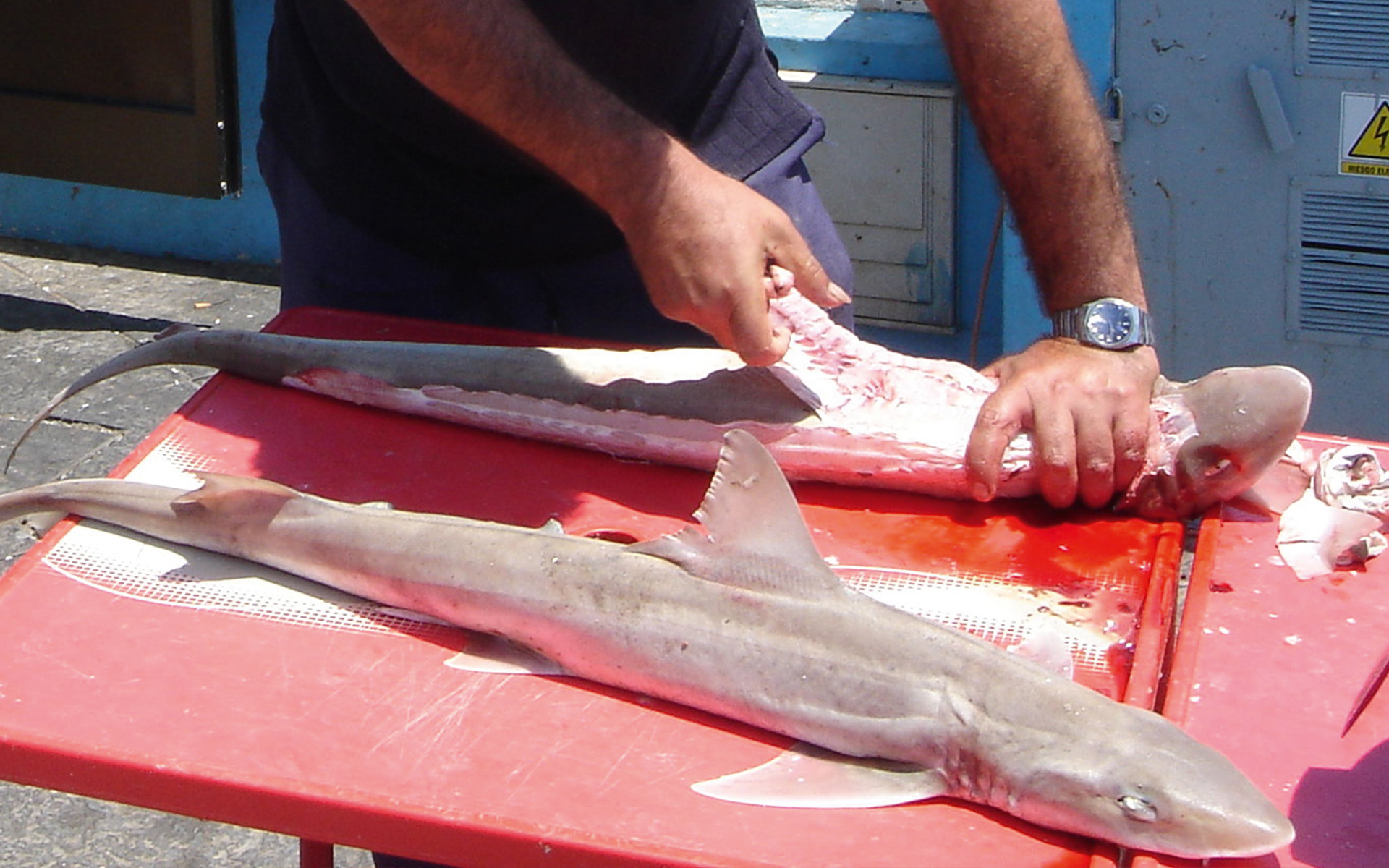 The populations of the spiny dogfish are threatened with extinction worldwide! 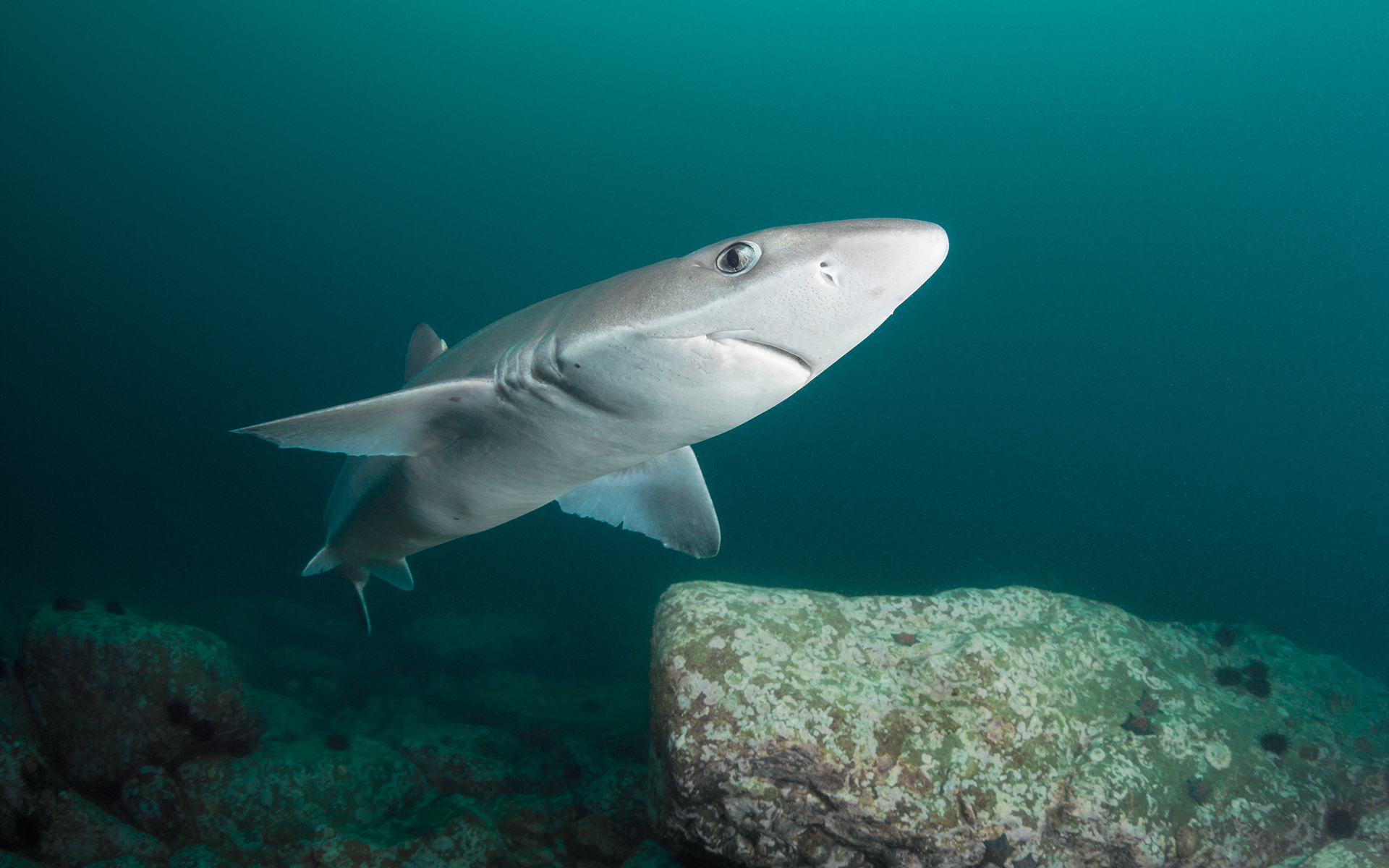 Dogfish is highly contaminated with methylmercury!