The best-known eco-label for sustainable fishing does not deliver what it promises. Call to the Marine Stewardship Council (MSC) to comply with regulations

Overfishing of the oceans. Species extinction. The ocean ecosystem, so vital to us, at the bottom. It will take all our efforts to bring about the necessary changes. The top priority is sustainability in everything we do.

The MSC ecolabel was founded with this in mind. It is a label that is supposed to stand for transparency and sustainable fishing and only certifies those who act according to these guidelines. Furthermore, it was supposed to create trust among consumers, and so it did not take long for it to become a kind of "gold standard" among eco-labels.

But what to do when this very label goes against its own intentions? With the aim of maximum growth, the MSC has often decided against sustainability and transparency in fisheries. Several cases have ben brought to light where fisheries have been MSC-certified that demonstrably do not operate sustainably and use extremely harmful fishing practices.

To counteract this negative development, many organizations have joined forces under the name "Make Stewardship Count". The aim is not to work against the MSC, but to enter into dialogue with it and return the label to where it once started. Because one thing is also clear: It needs more transparency and more sustainability to turn the tide on marine conservation. And labels that truly stand for these attributes can be an important building block for this.

The final chance for MSC to make a real difference on the water!

After the multi-year review the Board will decide in June whether and which parts of the draft Standard presented on February 1st and available for public consultation until April 4th will be implemented into the new Standard before publishing it towards the end of the year. Having engaged in the Fishery Standard Review (FSR) process since the start in 2018, we participated in many workshops and public consultations, wrote countless letters, …. but now it will be the last chance to ensure that MSC does the right thing this time.

As part of Make Stewardship Count and supported by many other organisations and responsible retailers we have demanded critical improvements to Principle 2 of the Standard, bycatch and ecosystem impacts and continued to request strengthening of the proposals made by the MSC thoughout the consultations as we are convinced that only a substantially improved Standard will eventually ensure that the blue label indeed delivers on it’s promise of “certified sustainable seafood” and “oceans teeming with life”.

And indeed we appreciate that the draft Standard published in February includes many good intents, such as

This could really raise the bar, drive improvements and prevent certification of all those fisheries, which we have continued to criticise over the last years as a stakeholeder in assessments and our objections against some of those certifications – so far always without success, as the current Standard allows for all these unsustaianble fisheries being certified.

HOWEVER, unfortunately the draft Standard as published contains serveral severe loopholes which must urgently be closed prior to publication of the final Standard text later this year. If not improved this Standard once again will fail to deliver improvements on the water and fail to rebuild credibility of the former “gold standard” of sustainability labels.

In our submission to the most recent consultation in April we have, therefore, detailed our concerns and told MSC that it urgently needs to revise the draft accordingly and that it should discuss and share such a revised version with stakeholders prior to publication of the final text.

After almost five years of Standard Review it is now essential to get this Standard RIGHT THIS TIME even if thereby delaying publication of the final text for another couple of months. Keeping in mind that there will be a 3 year transition period for fisheries and additional exceptions, the new Standard will not become effective on the water prior to 2030. Specifically the following improvements need to be made to the current draft Standard in order to close the exisiting loopholes and deliver on its intent.

All detailed concerns and proposed improvements are outlined in our written submission from April 3rd, 2022.

The Alliance calls on the MSC to engage in dialogue in order to swiftly implement the demands. These seven categories of demands cover the following topics:

The Steering Commitee consists of:

Involved partners
You can find an overview of all partners here:
https://www.make-stewardship-count.org/partners/ 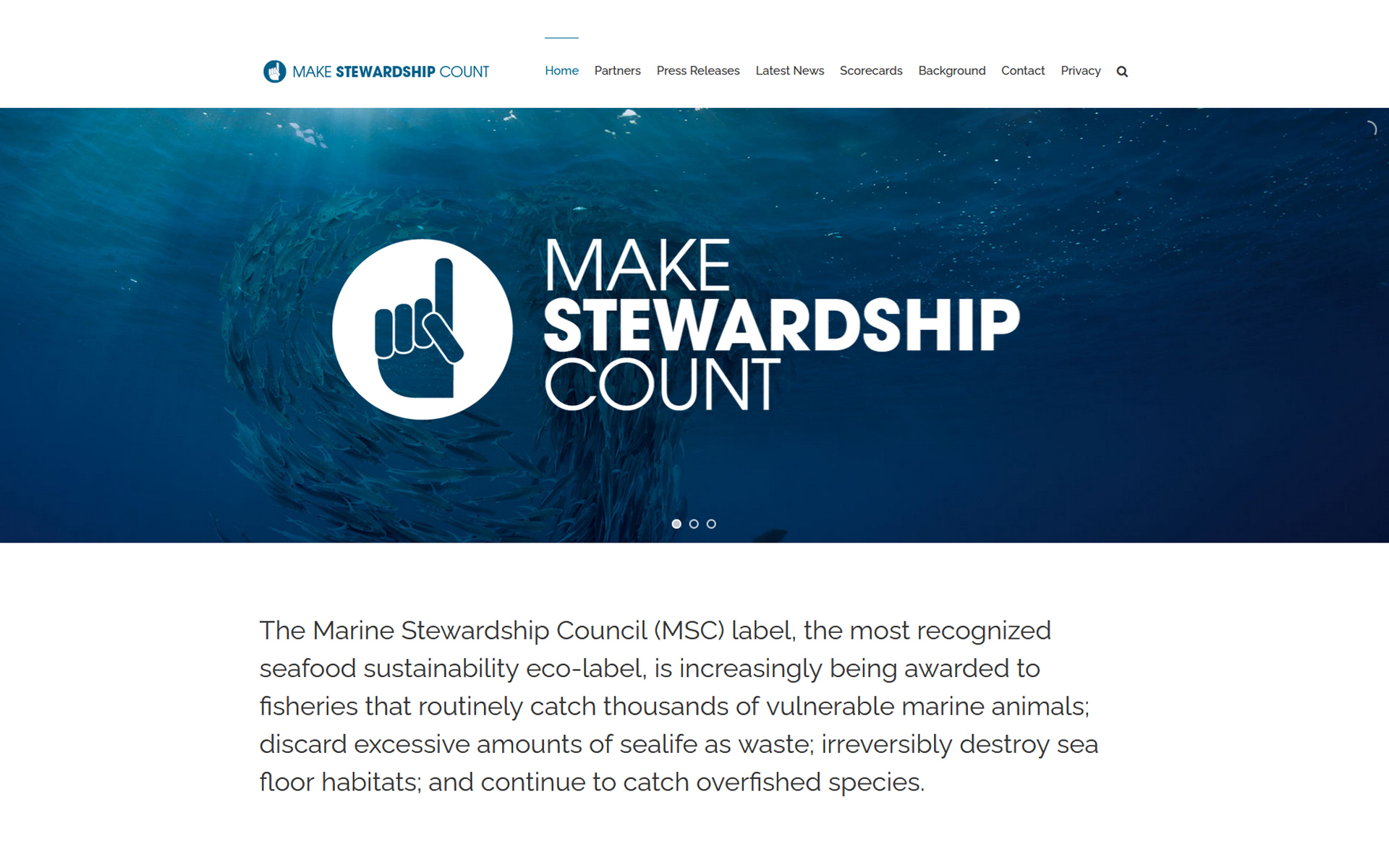 2019
Re-naming the campaign to "Make Stewardship Count". The campaign becomes an independent society which is located in Switzerland and has many partner organisations.

Written submission by Sharkproject in response to MSC's April 2022 consultation, stating that the current draft of the MSC standard needs urgent revision.

Joint letter from partners and retailers (such as MIGROS) to the MSC on 13.05.2022, calling for the necessary changes in the MSC standard to be maintained and enforced even in the face of industry opposition.